Football has come to the ancient city of Ankh-Morpork – not the old-fashioned, grubby pushing and shoving, but the new, fast football with pointy hats for goalposts and balls that go ‘gloing’ when you drop them. And now the wizards of Unseen University must win a football match without using magic, so they’re in the mood for trying everything else. 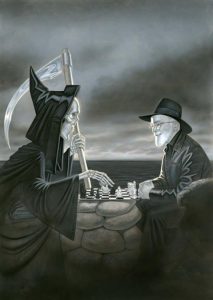 AT LAST, SIR TERRY, WE MUST WALK TOGETHER.

Terry took Death’s arm and followed him through

the doors and on to the black desert under the