Laughter In The Dark – Director’s Notes 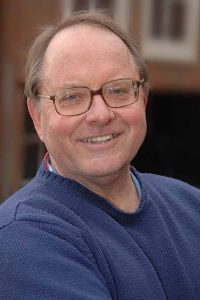 When looking for a play for presentation in Marlow and Marly-le Roi, the Players have to look for one with visual appeal, in which there are plenty of opportunities for actions to tell the story as effectively as words, and strongly drawn characters. In Laughter in the Dark we have found a highly amusing piece which seems to offer everything we need.

The play was written in the early nineteen fifties, at the time of the Ealing Comedies, the emergent but struggling British Film industry, and the Whitehall farces. English drama at every level was dominated by the concept of the “well-made “play. Bernard Shaw was only just dead; Terence Rattigan’s plays were at their height, John Osborne’s “Look Back in Anger” and the “kitchen sink” plays were ten years in the future. The physical drama and anti-realism of Bertholt Brecht are styles we had not accepted. Audiences looking for popular entertainment, could enjoy a good cry, as in “Brief Encounter” or “The Deep Blue Sea”; recognise the humour in their own lives as in the social comment of “This Happy Breed” or laugh at situation comedy as in “Sailor Beware” or “ Carry on, Sergeant “: both retrospectives looking at the National Service.

“Laughter in the Dark” is a clear forerunner of the “Carry On“ films, with its setting in a haunted house; its plot, pairing up of romantic couples, contrasted with the hen-pecked husband and his harridan wife, and the extraordinary butler. The characters could be templates for so many of the Carry On team: parts for Joan Sims ( or Hattie Jacques )  and Kenneth Connor, for Sid James, for Kenneth Williams, Esme Cannon, Renee Houston, and the later additions of Jim Dale, Barbara Windsor and Bernard Bresslaw.

Of course, it would be rather limiting if our team were to merely try to imitate whoever they saw as their counterpart. Instead, we have through rehearsals sought to find the character through the dialogue and the writer’s own directions in the script.

The play is certainly “well-made”: there is a clear structure which begins with explanation of the situation in Act One, as all the characters are drawn in to the snow-bound house; development of plot and situation in Act Two; and then further complications in Act Three, before the play draws to a conclusion with the arrival of a dea ex machine  and revelations leading to a denouèment which follows a tragic convention of chaos but to a hilarious climax!

There is, too, a great deal of symmetry: the couples presented; the discussions between the women about men are balanced by a discussion by the men about women. Staid middle class propriety is contrasted with the raffish world of the film industry and the hedonism of the circus. An apparently innocent young thing is shown to have a shrewd and manipulative streak; a hardened businesswoman melts as her feminine instincts are aroused; and the central couple change dramatically. Observing all this, and outside the action, are the butler and the solicitor.

The setting and properties of such a play are enormously challenging: we shall be taking trunkloads of material to France: and the special effects of sound and light are truly amazing.

But we shall just have to Carry On Playing!