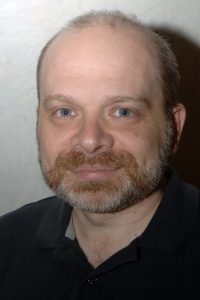 The idea of putting on a play adapted from one of Terry Pratchett’s books, is daunting. Not only do you need a huge cast, but with over twenty scenes, the logistics and amount of planning it takes is immense. Fortunately, we have an excellent team to draw on, so it is them I have to thank for making this evening’s performance possible.

As you may or may not know, Sir Terry Pratchett passed away in March 2015. He was a local man, born in Beaconsfield and left school in 1965 to start working for the Bucks Free Press. He went on to sell more than 85 million books worldwide in 38 languages and was the UK’s best-selling author of the 1990s.

In December 2007, Pratchett announced that he was suffering from early-onset Alzheimer’s disease. Describing it as a “a bit of a buggeration” he continued to write, as well as spending considerable time supporting various Alzheimer’s charities including the Alzheimer’s Society.

The production, adapted for stage by Stephen Briggs, is supporting both of these charities.

For those of you unfamiliar with the Discworld, it is an absurd creation; a flat disc balanced on the backs of four elephants which in turn stand on the back of a giant turtle, Great A’Tuin. However, by using alternative histories, societies and different species, Terry manages to draw some very recognisable characters, situations and solutions.